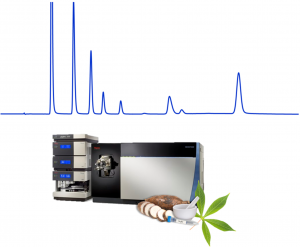 Cassava plays an important role as a staple food for more than 800 million people in the world due to its ability to maintain relatively high productivity even in nutrient‐depleted soils. Even though cassava has been the focus of several breeding programs and has become a strong focus of research in the last few years, relatively little is currently known about its metabolism and metabolic composition in different tissues. In this article, the absolute content of sugars, organic acids, amino acids, phosphorylated intermediates, minerals, starch, carotenoids, chlorophylls, tocopherols, and total protein as well as starch quality is described based on multiple analytical techniques, with protocols specifically adjusted for material from different cassava tissues. Moreover, quantification of secondary metabolites relative to internal standards is presented using both non‐targeted and targeted metabolomics approaches. The protocols have also been adjusted to apply to freeze‐dried material in order to allow processing of field harvest samples that typically will require long‐distance transport.