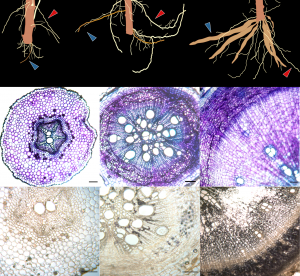 Cassava storage roots are among the most important root crops worldwide, and represent one of the most consumed staple foods in sub-Saharan Africa. The vegetatively propagated tropical shrub can form many starchy tuberous roots from its stem. These storage roots are formed through the activation of secondary root growth processes. However, the underlying genetic regulation of storage root development is largely unknown. Here we report distinct structural and transcriptional changes occurring during the early phases of storage root development. A pronounced increase in auxin-related transcripts and the transcriptional activation of secondary growth factors, as well as a decrease in gibberellin-related transcripts were observed during the early stages of secondary root growth. This was accompanied by increased cell wall biosynthesis, most notably increased during the initial xylem expansion within the root vasculature. Starch storage metabolism was activated only after the formation of the vascular cambium. The formation of non-lignified xylem parenchyma cells and the activation of starch storage metabolism coincided with increased expression of the KNOX/BEL genes KNAT1, PENNYWISE, and POUND-FOOLISH, indicating their importance for proper xylem parenchyma function.